While researching probate records at the Queens County Courthouse, I was nearly arrested by a gang of security guards.

Sometimes I freelance as a proxy researcher for people out-of-town willing to pay for my crackerjack services in the hunt for genealogy information.Â  The pursuit has taken me to numerous records rooms and archives in three boroughs around town, from church indexes at the NYPL Milstein Division to the Civil Court on Livingston Street in Downtown Brooklyn where one finds the curious files of old name change petitions.

Probate records are often a ripe source of family history, yielding financial predicaments, family bloodlines, and sometimes sworn documents where surviving kin relate provocative family histories about fighting for the rebels in the War for Independence or surviving the holocaust in Poland.

The gentlemen who work the records room at Kings County Surrogateâ€™s Court are affable and knowledgeable clerks.Â  They know their wills, conduct folksy polemics over pro basketball, and answer questions lickety-split.Â  They let you take pictures with your digital communications device instead of using the clunky copy machine, which might have been requisitioned from the 1973 set of New York cop movie Serpico.Â

The same applause is not inspired by a visit to the Surrogateâ€™s Court in Queens.

The records room on the 7th floor of Queens County Courthouse, on Sutphin Blvd. in Jamaica, is a tawdry place.Â  The courthouse building is a broad post-Deco municipal work of architecture, with brass eagles, gilt elevator doors, vintage lettering and old-timey teller counters with gold gates and wooden swing doors, like the set design of a populist Frank Capra pre-code movie repurposed for a 1980s sci-fi thriller where urban survivors of the apocalypse hole up and stake a new domicile of power under the Duke of New York.

Bright, stuffy and airless, the records room is without character but for the old ledgers dating to the 1700s and scripted by the quills of past clerks in colonial handwriting.Â  There is a card catalog as well as a few computer terminals that were spanking new when Bill Clinton beat George Bush for President.Â

The collection is supervised by a searingly mannered woman in bifocals, and a pudgy, balding, cavernously-pored and spaced-out attendant.

There were a couple of other researchers in the room.Â  One guy in a cheap suit who looked like a lawyer and another dressed like a shabby 1950s card sharp who works the mens room stall in the New York Public Library.Â

As I thumbed through the card catalog, the pudgy clerk was coughing from his seat behind the counter.Â

Signs printed-out on 8×11 copy paper, and some scrawled in the handwriting of an infant with a broken hand, demand that records must not leave the room, an ID is required to access all records, and that the use of cell phones is prohibited.Â  One might assume that such rule-stickling would result in the run of a tight ship, with respect, control and order of the records room for best use.Â Â

The psychic climate discourages the use of the room and its files.Â  I was deterred from using the old bound ledgers stacked on rollers along the walls because they were too fragileâ€”even though they were just dusty and manageably delicateâ€”rather than simply advised to be careful when flipping through them.

On my last visit, to research wills from the late 18th century, I was shook down by courthouse security for taking pictures with my smartphone.

Sure the signs say â€œNo Cell Phonesâ€ and â€œNo Electronic Equipment,â€ and it crossed my mind that it might also mean that photography in the records room was forbidden, but there was no 100% clear indication of it while downstairs security did not take my phone as it did my digital recorder and camera.Â  The beleaguered system must know that all three are just the dame samn thing.Â

When the lady supervisor, a crone of hectic countenance and frumpy posture, saw me clicking flashless photos of a series of ledger pages, she didnâ€™t just ask that I stop, but tried to confiscate my phone.Â  This was not exactly a James Bond job.Â

I said OK, as long as I Will get the phone back.Â  She would not commit to this so I would not hand over the phone, nicely.

â€œIâ€™m calling security!â€ she cried and stormed from the room.Â

This was fine, better chances I get the phone back if I gladly hand it over.

The pudgy coughing clerk shuffled over to where I stood.Â  Amicably, shaking his head, he noted that it was no big deal, hedidnâ€™t mind, itâ€™s a public record after all.Â  He was calm and ingratiating and made a casual reference to the supervisor being a bit off-the-wall.Â  Poor guyâ€™s had to sit there for years and listen to her manic horseshit while worrying if heâ€™s gonna croak in the records room.Â  He wasnâ€™t gonna go to bat for me, but I enjoyed his confidence.Â  He probably was paid well by the city, but did not spend it on duds or Kiehlsâ€™ product.

Suddenly, a blue wall of courthouse security guards emerged to put me under the hot lights.Â  Their arms were cocked to their belts and they glared as if approaching a burglary suspect.Â  I was interrogated by a tough young attractive woman in uniform with tight dark eyes and long black hair pulled clean back.Â  She commanded me to delete all the photos, and I had to prove it.Â  I did, and showed that the remaining gallery of pics only included the painting of Frank Sinatra at Patsyâ€™s Pizza in Spanish Harlem which I had taken earlier that week during a walking tour I led for tenants at The Schermerhorn supportive housing residence in Downtown Brooklyn.Â 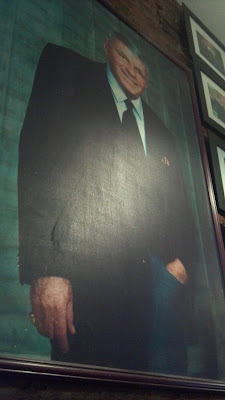 The guards ganged-up and were ready for me to get smart.Â  They tossed in the word â€œarrest.â€Â  A mean-mugged and slump-gutted guard tried to have a Socratic dialogue.

â€œYou see that sign, â€˜No Cell Phones?â€™Â  You know what that means?â€
â€œYeah, no cell phâ€”â€œ
â€œSo why are you taking pictures?â€
â€œI didnâ€™t think it meant takâ€”â€
â€œYou just said you know what it means!â€
I remained silent to give them no reason to pounce, which they ultimately did not.Â
I was escorted to the elevator by a fresh-faced and dim-spoken guard, and inquired if maybe some major infraction had occurred previously that involved picture taking in the records room.

Ahâ€¦ the jeopardy one puts oneself in as a genealogy researcher.
The courthouse security guards gave me the business, Queens County-style, praying I would keep talking smack so they could push the strongarm routine to an actionable level.Â  It is a courthouse, where post 9/11 security is still draconianâ€”unlike the public library.Â
After I left, they probably all had a laugh over french-fries and coffee.Â
â€œWhat a putz that guy, â€˜ey Tommy!â€

The crabby supervisor lady, natty-haired and nutzoid, was not an information scientist, otherwise security would not have been dispatched.Â  But I broke the rules whoops.Â  Future Use will never again try to take pictures in the Surrogateâ€™s Court records room in Queens County Courthouseâ€¦Â Â Â Â Â