Double Jeopardy (1999) is a Hollywood thriller starring potential Kentucky Senate candidate Ashley Judd and Tommy Lee Jones, two actors Future Use always finds it a joy and provocation to watch act.Â  The movie, like any good tinseltown popcorn-and-soda job, plays credibility like a card sharp, but its true merit is the juicy lesson the audience might learn in the ABCs of good research and resource-finding. 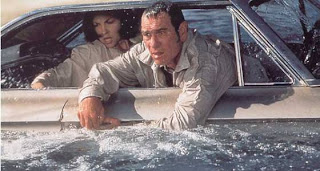 Judd plays an idle housewife with a brash rich husband and a fair young son, Matty, who she dotes on.Â  They live in a sleek house on jet-set Whidbey Island, a posh enclave north of Seattle, off Admiralty Bay.Â  Judd’s only passion in life, besides the boy Matty, is sailing.

The husband is a smarmy luxuriant, and buys Judd a treasured new sailboat.Â  But can they afford it?Â  She asks but doesnâ€™t care.Â  Husband assures that heâ€™ll find a way.

They set sail for a romantic outing at sea, but after an evening of wine and thankful sex, Judd wakes in the middle of the night with her husband disappeared and blood all over the cabin.Â  Judd is framed for the husbandâ€™s murder and goes to prison.

She soon determines that she was the victim of a set-up, masterminded by the husband, who is still alive.Â  Judd makes friends in the joint with a convicted murderer and former lawyer, who counsels Judd that the law is on her side.

Since she has already been sentenced for the murder of her husband, Judd can now kill him for real, without the worry of prosecution.Â  â€œThey canâ€™t do anythingâ€¦ you ever heard of Double Jeopardy?â€Â  Judd has not, and the prison hairnet lawyer explains, â€œYou can walk right up to him in Times Square and put a gun to his head and pull the fucking trigger and thereâ€™s nothing anybody can do about it.â€
Judd spends the rest of her time served working out, and fixating on both finding her son and murdering the husband. 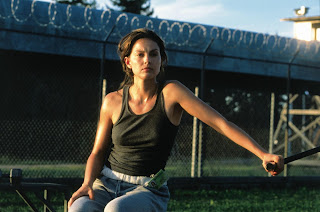 Soon Judd is somehow out on parole.

Tommy Lee Jones plays the hardnosed ex-law enforcement landlord of a parolee half-way house where Judd checks in, but later escapes to best serve her search.

Double Jeopardy was released a year before the dot-com bubble burst, when the e-commerce of data fusion was just as infant as Judd’s son Matty in the movie.Â  DJ depicts the promising use of what seem today ancient computer devices, and how they can be used as ripe information sources, especially if you are searching for your con-man husband to kill him.

The scriptwriters are wise enough to have Judd begin her research at the best source of information in the known universe: the local library.Â  Fresh out of prison, she coerces a dorky dude patron taking note of her comely features to demonstrate how to use the libraryâ€™s computer resources.

Judd is looking for her old girlfriend, who was in on the scam and took off with the husband and the kid. â€œSomeone said I should try the internetâ€¦â€ says Judd.Â  The dork dude suggests â€œLibrary Link,â€ and asks, â€œDoes your friend have email?â€Â  Back then that was a viable question.
No email or zip code or SSN.Â  But she was a schoolteacher… so they check the Dept. of Education database, finding records on the State Teacher Certification Board.Â  Bingo! Judd finds the school address where the friend works.
Judd does what any genealogist would do, and breaks into the school at night to rifle the files.Â  She obtains a Social Security Number, and is chased by cops over the dunes.

With the SSN, Judd proceeds to a ripe and streetwise fount of personal information, a car dealership.Â  Pretending to be interested in a red BMW convertible, she has the balding car-hawker perform a credit check, thus obtaining a home address.

Judd visits the house, and finds out from a neighbor that the friend has since died when a gas leak blew up the house by accident.Â  The neighbor is the type of character often played as the source of dramatic information in Hollywood movies: the wise old lady gardening in a floppy hat.

… Tending the library of local loam… Judd also visits her mother, similarly depicted in straw hat and floral gloves, digging in the tomato patch for a hidden stash of cash which mother gives to Judd.

Next, Judd visits the archives of the local newspaper.Â  She scans microfilm while the printing presses churn in the next room.Â  It would have been less noisy to just go back to the library for collections of old newspapers, but no matter.Â  She finds an obituary, always a keen source of good facts.

Since this is a movie, the text of the obituary yields nothing, until Judd inspects more closely the accompanyingphoto image.Â  The dead friend stands next to a Kandinsky painting, whose work the husband collected, a dabbling pretension of his phony slick-haired moderno-trash lifestyle.

Judd then heads to the art gallery and makes inquiries of the art dealer, a bowtied white-haired gentâ€¦ 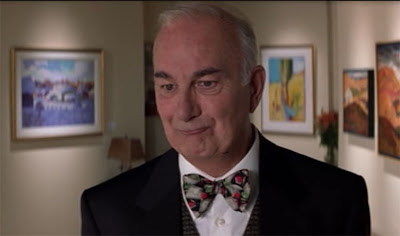 The art dealer is wired in.Â  He says, â€œLetâ€™s check Art Scan,â€ which is a Microsoft Office database program that does not appear too dated for the years before GW was president.Â  Digital images aplenty with metadata listed for title, artist, dates, medium and price.
The art dealer becomes distracted by a customer in the front room, who turns out to be Tommy Lee Jones, onto Judd’s trail.Â  Judd evades Jones and sneaks a peak at the â€œprovenanceâ€ function of a certain Kandinsky (a cover illustration for der Blaue Reiter Almanac… a grand but subtle nod to the old Almanac, always a favorable creative twist of right facts).

Behold the current address of the husband, who has assumed a new identity in New Orleans, a city of scotched information science, and where all fugitives go.

Ms. Ashley Judd traces a path well-tread by the news researcher or skip-tracer or reference librarian.Â  Only instead of clientage she employs sabotage, what J. Edgar Hoover called a â€œblack bag job.â€Â  Judd most resembles a genealogist, since she is out to track the whereabouts and whatabouts of family.
Does Judd find the son?Â  Does Jones find Judd? Does Judd do “Double Jeopardy?” Gotta watch the movieâ€¦ 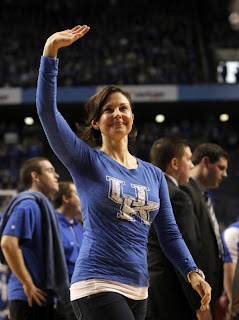 One thought on “Good Research at the Movies”