Two current exhibitions just a few blocks from each other in lower Manhattan involve the actions of printed matter in the information age. Boo-Hooray on Canal Street is devoted to The Situationist Times, a self-published journal designed in the mid-1960s by Dutch artist Jacqueline de Jong.Â Â 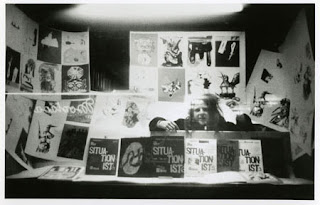 The Storefront for Art & Architecture on Lafayette and Kenmare consists of two conjoined exhibits: Arch-i-zine,Â  80 samples of â€œalternative and independentâ€ architectural publications, and Arch-Art!, which features 70 seventy artistsâ€™ books that â€œmine the overlap and frictionâ€ between architecture and art publishing.

The Situationist Times ran for six issues between 1962 and 1967.Â  The exhibit focuses on de Jong’s work as an artist rather than provocateuse, with samples of artwork, issues and contributions.Â  Though claiming to be aligned with the radical Situationist movement, de Jongâ€™s journal was decried by the Situationist International as â€œvacuousâ€ and which â€œhas the peculiarity that it is â€˜situationistâ€™ only in the sense that it is directed against the SI, its flock of occasional collaborators never having been (nor even claiming to have been) situationists.â€Â  De Jong is debunked as having â€œpassed eighteen months in the SI and talks about it incessantly.â€
The Situationists were argumentative, incendiary, reactionary, polemic and contrarian. Factions broke loose and members attacked one another out loud and in print. Poet Attila Kotanyi suggests the paradox in the opening lines of his â€œGangland and Philosophy”:
â€œThe situationist tendency is not aimed at preventing the construction of situations. This first restriction in our attitude has numerous consequences. We are striving to provoke the development of these consequences.â€ 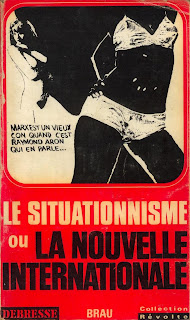 Situationists like figurehead Guy DeBord aggregated politics, history, perception, cities and the mass mind to create a cross-indexed Catch-22 of theories and ideas.Â  The nervous system of the movement followed concepts of â€œpsychogeography,â€ a ploy of the Situationists to regard space against its own type, and they might tour one city by using the map of another.Â

The neighborhood of the Storefront for Art and Architecture fits a psychogeographical sense.Â  Kenmare St. and Lafayette may be in NoLita, or Little Italy, and two blocks is the Soho Solita Hotel, on the edge of Chinatown.Â  The Storefront art space itself conforms to the layout of the Flatiron Building on 23rdand Fifth Ave.Â  The location is â€œSituationological.â€ 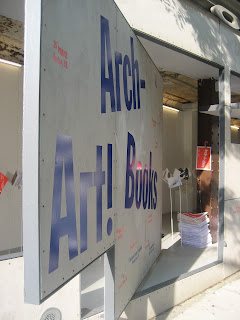 Storefrontâ€™s 150 books and zines are thematically bound by â€œarchitecture,â€ yet the exhibit is less concerned with the subject than with the venue of ideas about the subject, which is the industry of non-mainstream printed matter.Â  An accompanying broadsheet details a rich annex that sums up the gist of each zine with corresponding web address.Â  It is noted that the print publications are an extension of the website or vice versa, with samples here and here and here.Â  There is a multi-disciplinary, free-association of â€œland use,â€ â€œbuilt spaces,â€ â€œthe unequal distribution of environmental risks and benefits,â€ â€œromantic geography,â€ as well as various re-animations of policy, theory, public works and urbanism.Â  Most of the architecture involves city spaces over rural.Â Â 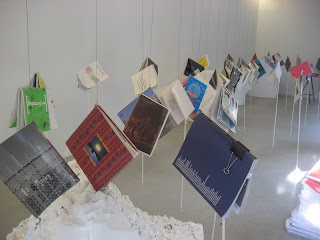 There is a cursory, mingling aspect to the Storefront exhibit.Â  One can hardly ingest it all and is not asked to.Â  The impressive range and format finds a point of entry by the psychological modes of collage. It is an evocative medley.Â  I used to work at Alabaster Bookshop on Fourth Avenue, and our cabinet behind the desk was filled with arty pamphlets and small press works from the last 125 years, in which the Storefront materials would easily find home.Â  One time Thurston Moore from Sonic Youth came in and asked for â€œmimeo-graphed poetry,â€ and I eagerly directed him to the collection.Â  Disappointingly, Thurston didn’t buy anything.
The Storefront agenda is artistic over political and several of the zines are the result of projects conducted by university students.Â  Locales represented in the collection include Scandinavia, East Africa, Western Europe, Australia and North America.Â  The zines describe themselves in the the annex as seeking to encourage discourse and awareness.Â  The artists and editors and thinkers and students behind these publications are not so much radical activists or political advocates other than the status of â€œnon-mainstream.â€Â  In the â€œinformation age,â€ the “mainstream” suggests a power structure enabled by greater mass-production and fewer independent ideas.Â  Storefront maintains a sort of archival objectivity in the scope and non-hermeneutic of the assemblage.Â  Some of the zine descriptions read as more ambitious and catchy than the actual content, but it is inspiring to know that such an ongoing proliferation of work exists. 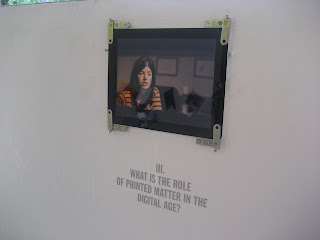 Sometimes, the opposition to â€œmainstreamâ€ architecture seems equally as counterproductive to the physical areas at hand.Â  At the former site of the Twin Towers, some have suggested building a farm or a buffalo park.Â  Sounds absurd, but so does the next tallest building in the city whose height equals a symbolic number.Â Â

Public space and private interest are surely ripe topics.Â  When eminent domain was enforced in West Harlem so that Columbia University could expand north and build new facilities and occupy old buildings, there was naturally an uproar.Â  The area was a last remnant of industrial Manhattan, with the Studebaker factory long turned over to commercial space, and a Dinosaur BBQ down the block.Â  Bus depots and factories no longer find home there, except for the Madame Alexander doll factory, which is also a stop on the double-decker tour bus.Â  Two blocks away is a 1920s replica of the old whites-only Cotton Club.

The neighborhood could have easily tilted towards a Times Square redux, so why not favor education over chintzy entertainment or luxury hi-rises.Â  It is a Situationistic predicament.

While in its day The Situationist Times strove to be original and subversive, Arch-i-zine and Arch-Art! pay deliberate homage to the analog and handable “little magazines phenomenon in the 60â€™s and 70â€™s.”Â  The Situationists fashioned themselves as unprecedented railers against thebourgeoise yet nodded to Marxist tradition and harked back to earlier anti-establishment movements like the Surrealists of the 1920s or Vorticists of the prior aughts.Â Â The two exhibits find kinship in the display of what book objects might mean, and surely call to mind the Occupy Wall Street movement, having opened around the time of the May Day marches when the architecture and open spaces of New York were re-mapped as a staging ground of unrest, populism and outcry against the â€œmainstream.â€ 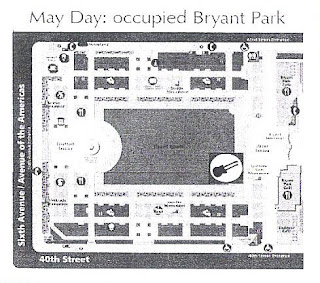 Situationism plays a key role in The Project on Law and Mind Sciences at Harvard Law School, where “non-salient factors around and within us” inform ideas on legal policy.
The Storefront show is co-credited by Printed Matter, Inc., the best artistsâ€™ bookshop in town.