The National Automotive History Collection (NAHC) at the Rose and Robert Skillman Branch of the Detroit Public Library has made available its archives regarding the industry of “wheeled land transportation in the United States and abroad.”  The NAHC collection includes 77 boxes and 4,000 photographs donated by the Automobile Manufacturers Association in the 1950s, and “papers, records, documents and invoices” of the Automotive Council for War Production, led by Lieutenant General William Knudsen, an “expert on mass production” and former president of General Motors.  Lt. Knudsen was appointed by President FDR. 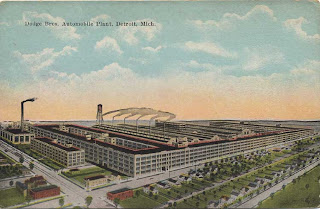 America fosters pride in its industry of making cars.  It is a value for researchers to traverse the pike of records left behind.  History and cars united on TV this past Super Bowl XLVI, when a highfalutin plug for Chrysler motors aired at half-time.  Over a montage of Americanistic images, veteran Hollywood gunshooter Clint Eastwood narrates the bad economic state of things, that “We’re all scared because this isn’t a game.”  The commercial harks to a simpler, more communal time unto which Clint pleads Americans to crank new life, the old greasemonkey faith and scrimmage line of hard work.  It’s “half-time in America.”

Either way the historian of the American wheel should be pleased.