Future Use was en route to the job interview, waiting for the G train, when across the tracks on the opposite platform, a young man was mugged.Â  Three youths punched him, snatched his iPhone, and ran.

â€œOwwwww!â€ cried the young man, in polo shirt, rolled jeans and flipflops.Â  It sounded like he had just tripped and scratched his knee.Â  And then he was surprisingly very practical, though surely shocked.Â  â€œHeyyyyy thatâ€™s mineâ€¦â€

The guy was sitting on the bench when attacked, and another man sat next to him, who didnâ€™t move, and I think too was listening to his iPhone.

I had to be at the interview at 1PM and it was now 12:10â€”I know because I read the police blotter the following week in the Brooklyn Courier: 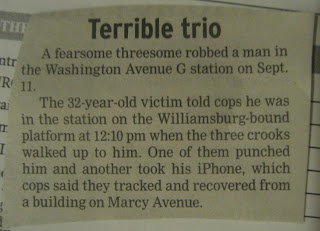 Ten minutes later, transferring to the A train, on the platform I noticed the coincidental warning poster:
Â 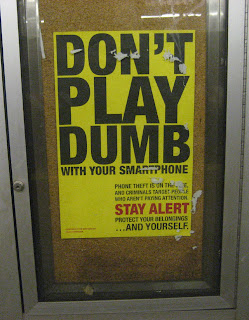 There is a black market in digital informationdevices.Â  You buy one on Ebay, perhaps it was ripped off from someone in the midst of scrolling their Lana Del Rey playlist.Â  Numerous papers note the thefts are becoming a trend.Â  From the NY Daily News:

“Deputy Inspector James Klein said outside the Apple store on Fifth Ave. and 58th St. iPhones and iPads have surpassed cash as the most commonly stolen property in the city… As of mid-August, 1,555 Apple products were reported stolen this year, compared to 1,386 at this point last year, police said.”